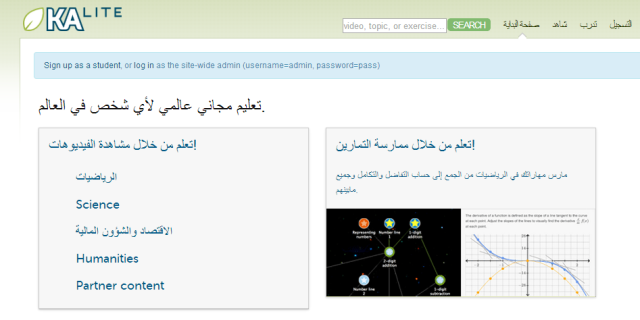 Not the Khan Academy of olden days

This week I learned (via Tony Wan at Edsurge) that Khan Academy lessons are now being offered offline. The program is called “KA Lite” and is run by the Foundation for Learning Equality. The idea is that users, or teachers, around the world will be able to download lessons with translations in their local language, then access them later even if internet is unavailable.

My impressions from a quick look at the program site are very positive. Dylan Barth, Learning Equality president, confirmed on Twitter that the translations are being crowdsourced. Personally, I’d like to see some kind of quality control on the translations done by professionals. I’ve seen some issues with Duolingo’s Immersion lessons, which are also crowdsourced, where there’s a bit of groupthink and users tend to translate word by word. That said, professionals might be prohibitively expensive (or unavailable, depending on the language).  It’s still wonderful that they’re offering these lessons in so many languages that are often ignored by US-based organizations.

What makes the program even more promising is that they’re planning on allowing local teachers to create their own content, in the local language.

@finnismundi @tonywan materials will be created in the local context, and then synced (when Internet is available) to an online curation hub

They don’t have a firm date for that step, but when it happens, it will have the potential to significantly change international education. For the past few years, there has been a lot of buzz about MOOCs and other new learning platforms, but they’re largely been off-limits to the billions of people who don’t speak major European languages or don’t have reliable internet. Switching from a way to create (US-focused) content to a platform to deliver content that is contextualized for developing countries will a big step toward offering excellent education for everyone.

Oregon... some places.... SF. Working in education, technology, and social impact (or some combination of the three).
View all posts by Finn Smith →
This entry was posted in Edtech, News. Bookmark the permalink.